Kelly, or “Kat” as some call him, has been working with LightWave and Fusion for nearly 30 years. LW starting in 1990 and Fusion in 1995. He got into VFX at the early age of 15 after being introduced to LightWave3D in 1990 by his Uncle Bob who worked as a CBC cameraman and editor in Edmonton, AB., Canada and owned a VideoToaster on the Amiga computer platform. That was the beginning… since then its been a bit of a trip for sure. Ending up eventually in Vancouver, Canada in 1998 after spending much of the 90s doing little VFX jobs for small films and multi-media productions as well as becoming the top visuals artists at raves in western Canada things got strange. Designing the first on set, real-time motion-control VFX assist system in the world, he landed jobs on a number of feature films and TV series including the famed StarGate Franchise (SG:1 and Atlantis). A short time later he would go back to his roots of working purely in LightWave3D and Fusion after picking up the phone at the right place and the right time. In the spring of 2005 he joined the hit TV show BSG. As the VFX Consultant for Battlestar Galactica, he has won both a Peabody and an 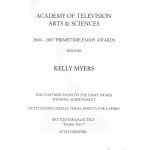 Emmy Award (Honors Certificate) during seasons II and III as part of the crew. Before  and Stargate SG:1, SG: Atlantis, Elektra, The Final Cut, White Chicks, X-Men II and many other productions shot in the city of Vancouver he picked up work on several Sy-fy network shows over the years as well. Doing Motion Control Camera work and real-time compositing, on set supervision or CG supervision in post, he has done a lot of different stuff but always for the love of LightWave3D. In 2011, Kat signed on to be the CG Supervisor for Iron Sky. After spending almost 8 months there working on the show, Kat is currently freelancing globally while preparing his own webseries called “Stasys“. This series will be fully CG and done in Stereoscopic 3D and realized in other formats as well. (More about that later). He won an award for Iron Sky as well out of Australia. Neat. Best Visual Effects or something for the AACTA event that was held in January 2013 down in Sydney. On top of all of this he has a bit of a gaming production background while loving arcade classics like Gauntlet and Black Tiger (which he named his record label after). He continues today to produce VFX work as both an artist and supervisor for productions around the world while somehow fitting in the time to write TV/Film Scripts when he can’t sleep. Outside of VFX, Kat’s other persona, DJ Lithium relates to his other favorite profession, which is of course the art of vinyl record Deejaying. Considered by many to be one of the top Trance DJs in North America, he owns and operates the trance label group, Black Tiger Recordings and his mixes can be heard via iTunes. As a producer of over 16, 12″ singles and dozens of incredibly popular DJ mixes, blacktigerrecordings.com radio has has been on the air for over 15 years with fans in every corner of the globe. His very first record released in February of 2014 (about freaking time) and he is already working on more tracks for 12” release and eventually a complete album to debut sometime in the fall/winter of 2014. Kat would also really like to protect and raise armies of these friendly little animals know as Ocelot’s who are native to the southwestern portion of the United States (where Kat is actually from). Aren’t these guys cute! ?

The world is our sand box!

Anyway, if you need to get a hold of Kat, there are about 50,000 ways to do so on this site. But you can take the quick route by emailing kat@liberty3d.com or heading over to our parent company website at www.declarationpictures.com.