Object packs for use in your 3D projects 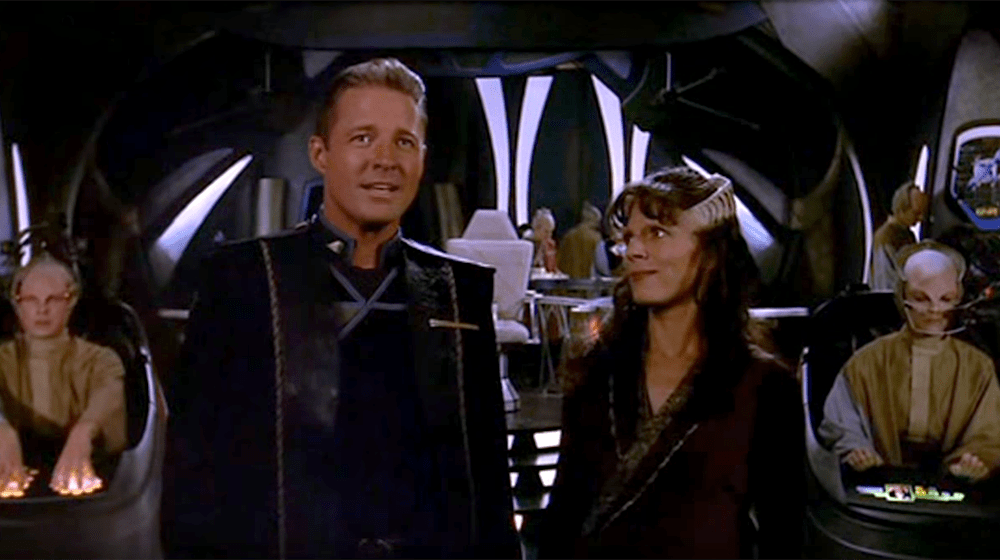 Babylon 5 Legacy LightWave3D Collection
In an attempt to preserve some of the legacy of LightWave3D's history in the 3D and VFX world and its contributions to some of the most icon sci-fi television shows of the last 30 years; Liberty3d.com is making an effort archive and make available to the LightWave3D community many fan built assets from the series Babylon 5 (B5). In this free to download collection, there are dozens of objects and scene set ups that will allow you to reproduce many wonderful visuals from the mid-1990s series. This is a great collection for anyone with a copy of LightWave3D going back to version 5.6 (if not earlier but we haven't tested this) to LightWave3D 2015.3. Later versions of LightWave3D may cause some pretty serious breakage of certain textures, and - volumetric engine or weapons fire effects rigs, so be warned! This doesn't mean that they cannot be reproduced using later versions of LightWave3D. They can, it just takes a bit of work. While we can't list everything here, these are some highlights. Included in this collection: Whitestar LWO Vorlon Dreadnought Velarian_Class_Battleship v9etu69q4r28-Babylon5 Shadow_Ship_(non_cannon) Shadow_Alien Psy_Corp_Mothership narncruiser minbari_warcruiser Minbari_Sharlin_War_Cruiser minbari_fighter minbari Jump_Gate Hyperion G-'Quan_v1 Earth_Force_One EA_Shadow_New_Babylon_Station EA_Omega_Destroyer_by_M.Tarling EA Badger StarFury F3D Release Centauri_Liner big flying saucer Babylon6 Babylon5 Babylon_5_Starfury_Version_3 B5Dockv2 Ashinta_Class_Escort_Frigate ACTA_Jumpoint A_Call_to_Arms_Babylon_5_Jump_Point These and many more are included in this collection. They are provided "As Is" and where possible as they seem to be preserved from their original states produced by fans, credit for the authors is included in readme.txt files for most.
Price: $0.00 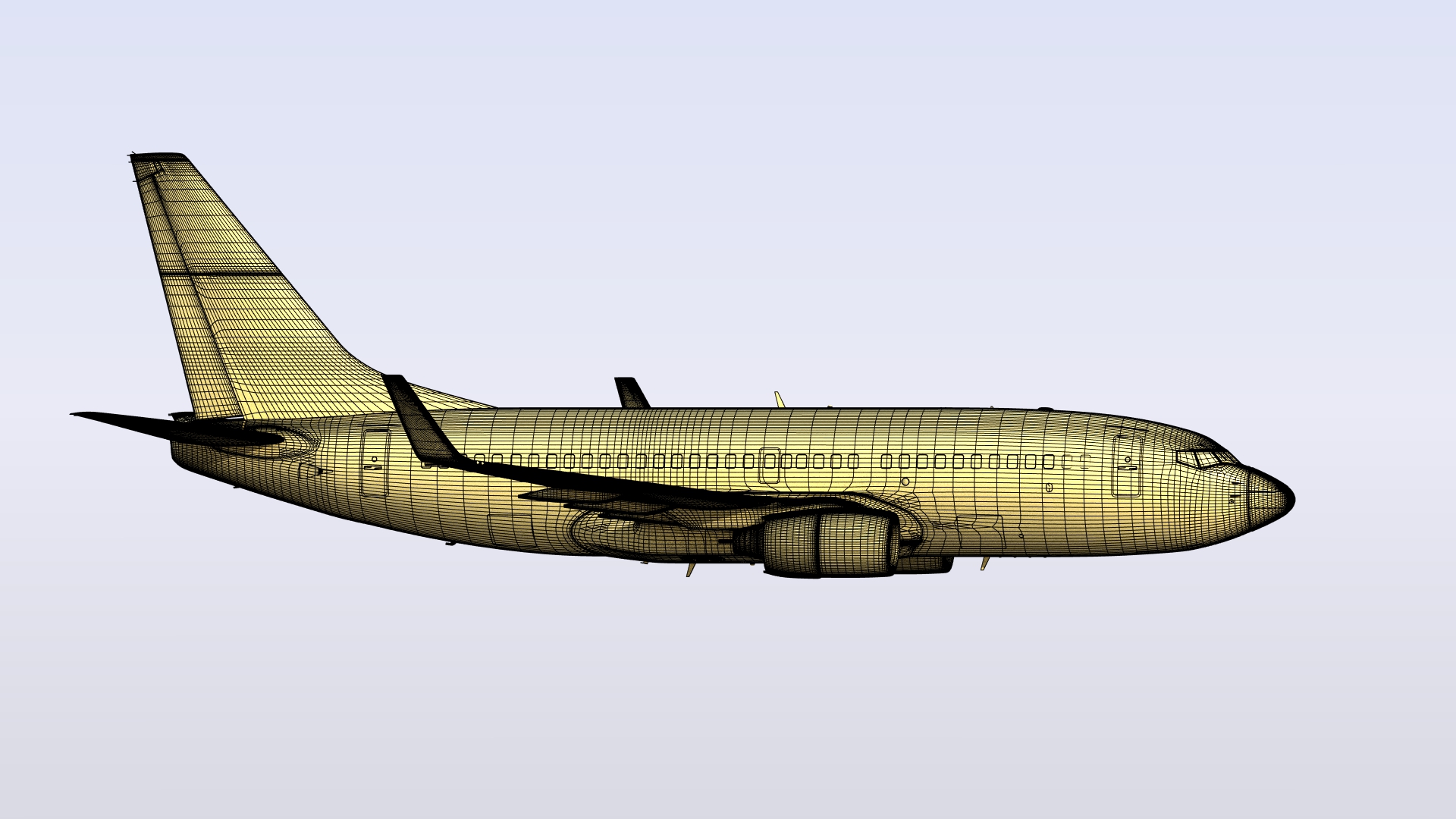 Boeing 737-700 in LightWave 3D [Cat]
Catherine Smallwood's Boeing 737-700 aircraft. Check out Catherine Smallwood’s awesome Boeing 737-700 in LightWave 3D format (LWO3 2018+ LWS). Modeled to be technically accurate and look good on camera, this model has all the main fixings of an awesome LightWave3D asset. It is essentially “ready-to-render” in LightWave3D 2018+. Use your own paint scheme or use Catherine’s maps as a guide easily giving your shot or demo or whatever you might need a 737-700 for (AR/VR, games, you name it) a sense of reality without compromise.
Price: $49.95 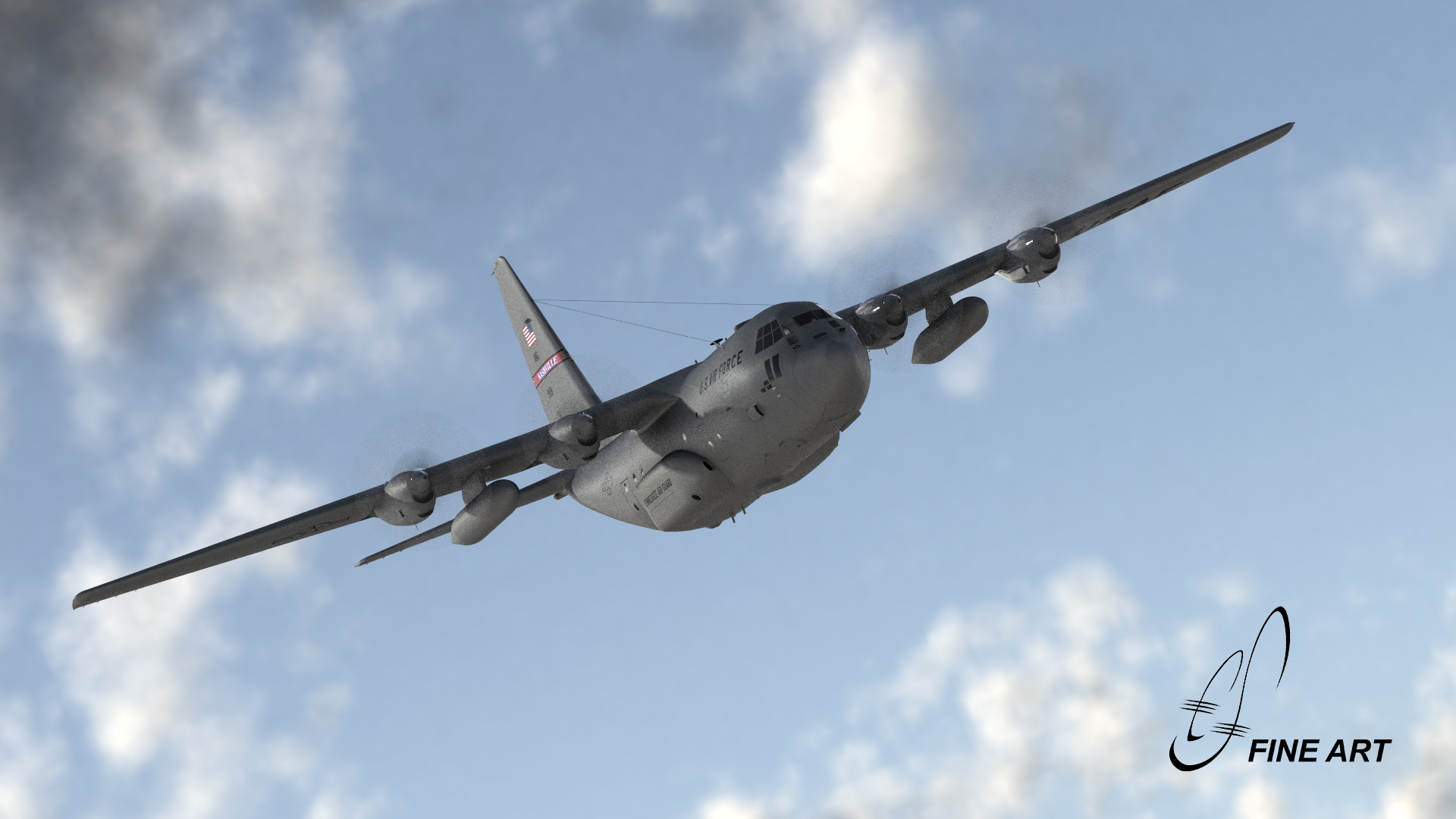 C-130 Hercules in LightWave3D [CAT]
C-130H Hercules for using LightWave3D. Made of 175,737 polygons, this detailed replica of the Lockheed C-130H Hercules has the major control surfaces separated but not animated, propellers are in their own layers with pivot points set for rotation in your animations or still images. The model comes painted in the Tennessee Air National Guard color scheme. For repainting the model easily, a Photoshop PSD file is included with the basic layers and the UV Mapping images. The rear door edges are modeled into the aircraft, but not separated and a simple interior is placed inside if you wanted to finish the cargo doors.
Price: $49.95 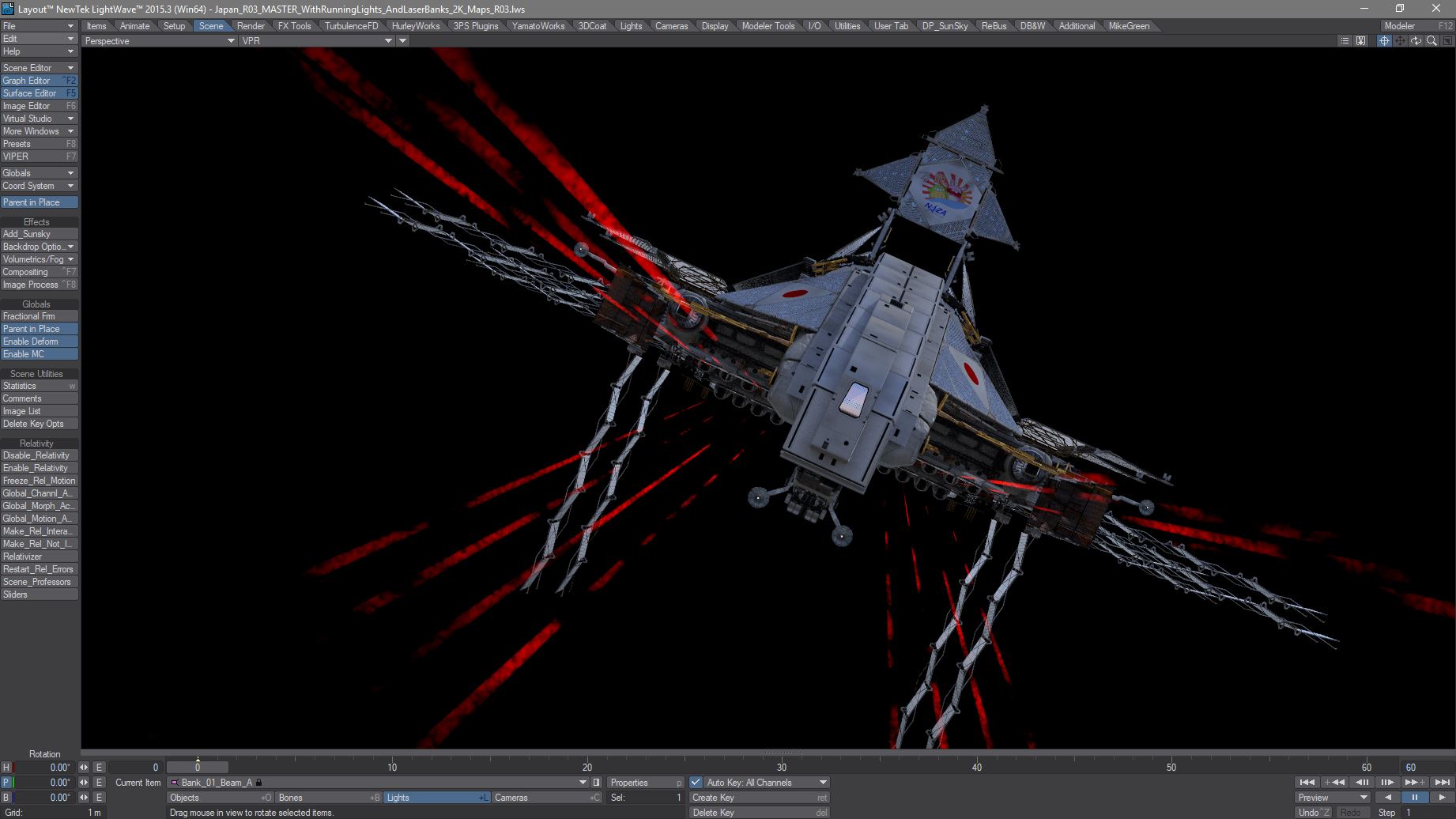 Iron Sky Model and Scene Pack Vol. Three [KAT]
Iron Sky Model and Scene Pack Vol. Three, features two very special ships from the feature film "Iron Sky". First up, the Russian "Mir" which is a proverbial kit bash if there ever was one in science fiction, the "Mir" from Iron Sky is it. A reflection of the horrific (if not always fully of surprises) state of Soviet and later Russian Federation space programs this ship combines what was supposed to the "burn up and splashdown" re-entry disposed of space station of Taco Bell publicity stunt fame fa few years back. That and spare parts of just about anything the Soviets and later the Russian Federation space programs shot into orbit. Meticulously detailed in many places, while head scratching in a few others where details could have been really been driven towards, the "Mir" in Iron Sky is a border line capital ship and the direct opposite of the USS George W. Bush scene in the film. It's primary weapon is in effect, a Particle Projection Cannon with its power source said to be re-purposed nuclear material from failed Mars missions, or orbital nuclear weapons platforms. Take your pick. With the "Mir" you probably would be right with both. "It came in pieces" so to speak, and the primary weapon system is a frontal assault type, more than likely intended to strike at ground based targets such as ICBM silos, power plants, critical infrastructure or ocean faring weapons platforms such as American Aircraft Carriers and their support ships. Fully rigged, this model and scene set up for LightWave 2015.3 (and previous versions going back to 10.1) has been checked and ready for you to play around with and study. It includes the original engine system and PPC weapon rig used in the feature film. Please note, the final effect was treated heavily in post and color corrected to the final result one sees in the picture. Next up is the controversial, almost lost to several hard drive crashes and idiots with lawyers and market courts with no concept of reality... the Japanese "Banzai" Ship. This ship has seen work in 4 different 3D packages. Originally built in 3DSMax, then modified and cleaned up in Modo, before being completely overhauled again in LightWave3D in order to get it it to hero level as picture ready requirements needed to be upped to the best level possible after several shots were added to the feature film shot list with close ups of this ship being called for (because its that's cool). This meant final work completed including the volumetric engine system and laser bank weapons rigging by Kat himself who also prepared it for destruction/ramming duties in shots found at the end of the picture. A combination of LightWave3D Modeler (mostly Modeler working on the fly during shot set ups) and 3D-Coat was used to produce the damage morphs needed to finish the job. 3 highly skilled VFX artists contributed to the design, construction, and "flight" of this model and it was produced completely independent of the "Production Designer" on the show who interfered constantly, with the VFX process. Maybe that's why it's so cool? Yes, because it's an absolutely original design. Seb, Tuomas and Kat say "banzai!" mofos!
Price: $44.49 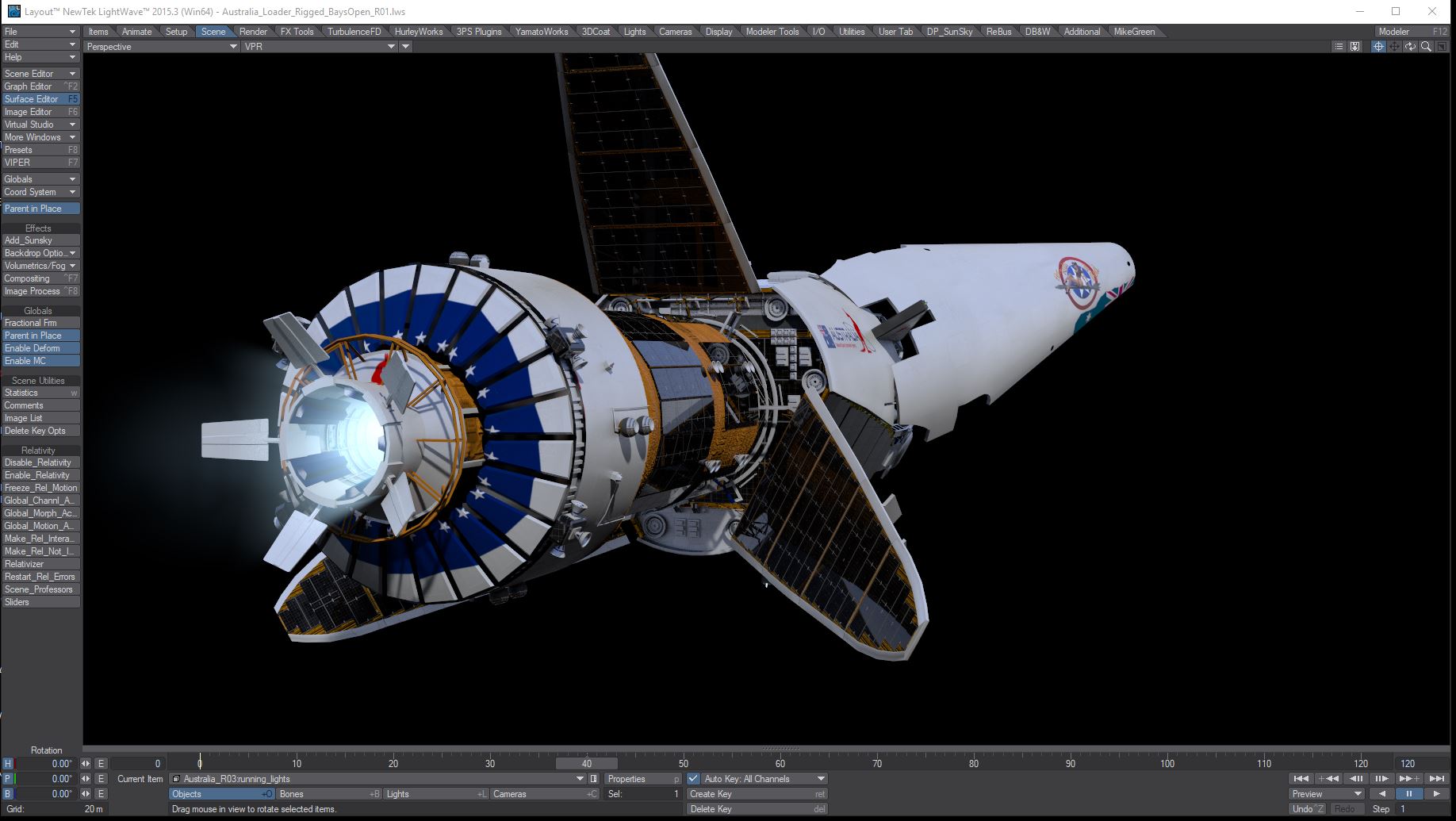 Iron Sky Model and Scene Pack Vol. Two [KAT]
"The Commonwealth Ships" Three "Earth Fleet" ships, specifically those from the British Common Wealth as we referred to them on the show are included in Iron Sky Model and Scene Pack Volume 2. You get some really awesome craft in this one! The British "SpitFire", the Australia "Rooketer" (roo as in kangaroo) and the Canadian "CanadArm3". Each of which includes their appropriate volumetric engine set-ups and feature animated moving parts with the exception of the CanadArm3 ship which didn't have any moving parts. These are all "Hero" models, meaning they were the ones used for close up shots and later the base for downres or proxy objects used for shots where they appear in the distance or for previs. These models are an essential starting point to the series of packs being released later where entire shots will be made available to LightWave3D users with the goal of pretty much the entire work done in LightWave3D for the original film, being released. 4K, 6K and even 10K resolution texture maps are included where applicable, matching exactly the way they were used on the show.
Price: $49.98 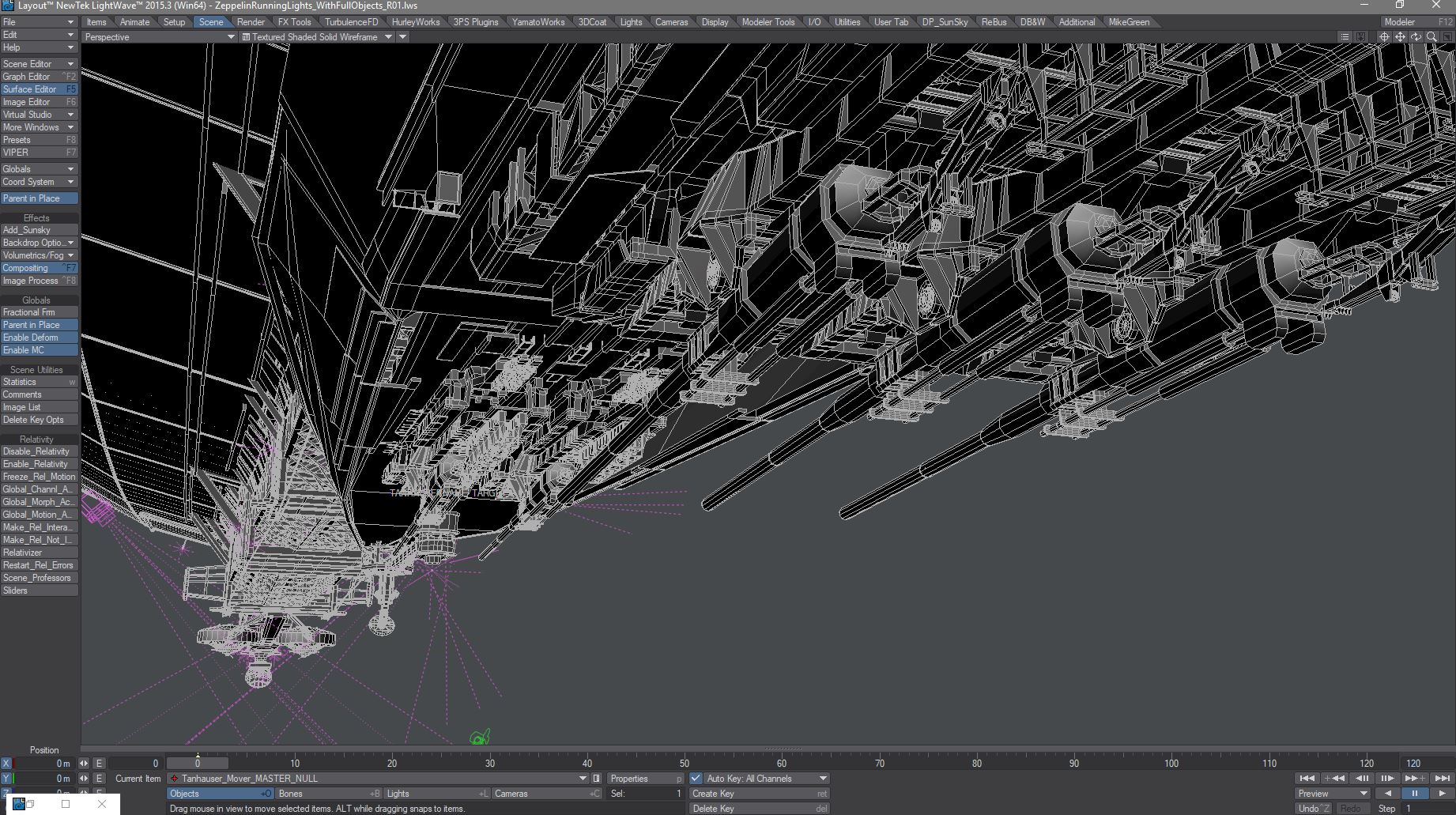 Iron Sky Model and Scene Pack Vol. One [KAT]
After 7 long years, Liberty3D.com is proud to announce the availability of the Iron Sky LightWave3D assets library. Kat has opened up the “vault” and begun to prep each of the main Earth and Moon NAZI ships featured in the first film. These are not baked down, neutered versions of the originals. They ARE the originals! Used in the show! Initially produced using LightWave 10.1 and early beta versions of LighWave 11, all of the scenes have been pulled forward to LightWave 2015.3 for maximum compatibility. LightWave users from LightWave3D 9.6 to LightWave3D 2015.3 can load these scene files up along with the objects almost by default. Only two 3rd party plug-ins are required; DP Kit and DP Light which are both free to download and use. DB&W’s Material Booster Node may be required for some scenes to load correctly but is not required should you not have it. It is optional but we encourage you to support DB&W by picking up their tools. LightWave3D 2018 Compatibility is not entirely possible (at least out of the box) due to the massive changes in the rendering, shading and lighting systems in the new versions of LightWave3D. However, Kat is working on that. Most of the basic surfacing will come in with some adjustments using the emulated “layer” system but really it should be rebuit for the new PBR technology in LightWave3D 2018 and beyond. The lighting on the ships, specifically the volumetric lighting systems such as those for the engines of most craft will also have to be adapted to the new render and volumetric technology in Lightwave3D 2018. These incredibly rare and detailed assets represent thousands of hours of effort to produce and we are offering them exclusively to the LightWave3D community in their original form as an educational initiative. LightWave3D users new and old can study them and learn while also adapting them to their own scenes or making use of them as they see fit for their own reasons. Kat is granting a limited license for use by individual users of LightWave3D and options for commercial use as well. Several packs are planned and in the works. First up is Iron Sky Model and Scene Pack Volume 1. Iron Sky Model and Scene Pack Volume 1. Three iconic ships are included in Iron Sky Model and Scene Pack Volume 1. The USA’s George W. Bush, the Moon NAZI “Tanhauser” Zeppelin and the Moon NAZI Valkyrie. Each of which includes their appropriate volumetric engine set-ups an in the case of the Valkyrie the volumetric gun system which are able to be animated and aimed for firing. These are all “Hero” models, meaning they were the ones used for close up shots and later the base for downres or proxy objects used for shots where they appear in the distance or for previs. These models are an essential starting point to the series of packs being released later where entire shots will be made available to LighWave3D users with the goal of pretty much the entire work done in LightWave3D for the original film, being released. 4K, 6K and even 10K resolution texture maps are included where applicable, matching exactly the way they were used on the show.
Price: $99.98 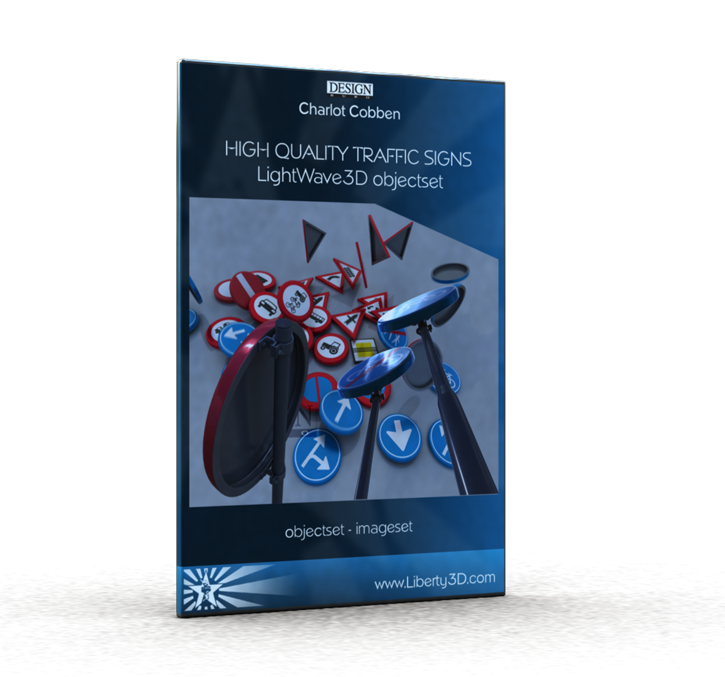 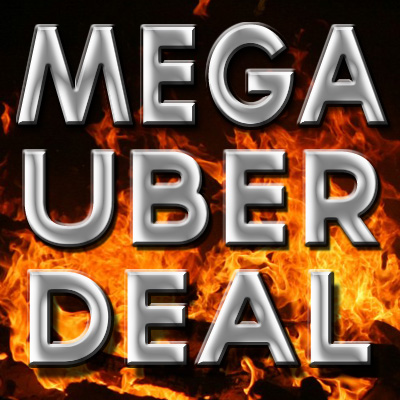