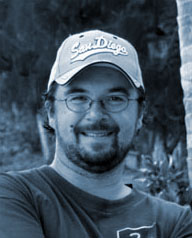 Kevin Phillips hails from the green shores of New Zealand, the home of feature-film effects house Weta Digital, and has been involved professionally in CG since early 1994. In early 2001, he worked as a 3D generalist doing character and technical animation work for the local (and occasionally international) TV market at Flux Animation Studios for over 5 years. During this time he was involved in a bit of everything CG (character work, prop modeling, environments, etc), along with a healthy dose of TD (Technical Direction) work doing dynamics, rigging, lighting, render optimisation and script development. Having strong connections within the local educational sector in New Zealand allows Kevin to provide industry level training for modeling, rigging and animation in both LightWave and Maya to a large base of fresh new artists wanting to study at an institute. He is currently teaching 3D at Natcoll Design Technology. In late 1997, Kevin also founded Kiwavers – the official New Zealand LightWave Users Group – a live and vibrant support and networking mechanism for New Zealands CG community (from hobbyist to professional). Initially designed to provide much needed hands-on user support for LightWave3D, this group still meets monthly and discusses not only the latest animation news from the online world, but also shows and talks about some of the outstanding work being done by local artists and studios. Much like his work with Kiwavers, and along with the citizens here at Liberty3D.com, Kevin hopes to share much of this experience with the online community of talented professionals, students and hobbyists through quality training resources and assets.

Over the years, Kevin has produced many tools and scripts to manage and improve workflow in various areas of LightWave.Â  His scripts can be downloaded freely from the links below: Kevin has also created a collection of free image maps and textures that he generously gives to users for their own work.Â  To download these, use the links below: