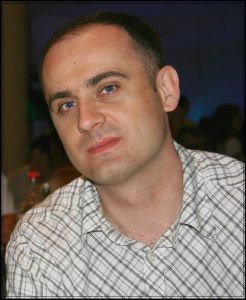 Hi! My Name Is Elvis Blazencic also known as Lewis ( people call me Lewis for many years so that’s like my second name to me:). I was born and still live in Croatia. My interest in CG started around 1991 using my first “real” computer, the Amiga 1000. Before that I was working on a Commodore C16 after that Commodore C64 for 2 years and then the Amiga A1000. My first steps into the world of computer graphics were originally made on the legendary Commodore C64 with a program called “Simons Basic”. After some period of playing games I began some “serious” work using my A1000 (later A1200+Blizzard CPU/FPU), making 2D images in a program called “Deluxe Paint” and after that started using Real 3D, Imagine 3D and LightWave 3D back in the 90s on the Amiga. In the mid 90s I got my first real CG Job working at a TV station for several years. Later on I continued to work professionally the CG Industry doing everything from modeling, texturing, animating, rendering , Photo, Video and Sound editing. Currently I’m working as the Lead 2D/3D Artist for Arch-Viz/Light simulations at Nova-Lux d.o.o. as well as freelancing on many video game, TV broadcast, video and movie projects. My email lewis @ tomsoft.hr You can find my training tutorials here on Liberty3d.com

Advanced LightWave Modeling Projects - Chevy Impala [ELV]
Advanced LightWave3D Modeling Projects - Chevy Impala Car Model Lewis3D (Elvis) Get this complete project and model a 1958 Chevy Impala using spline patch modeling techniques. Lewis takes you through the entire process from start to finish including the set up of modeler to make the most efficient use of your time by placing the most often used tools in front of you for easy access. With 68 Chapters in total running just over 37 hours this tutorial will turn you into an expert Lightwave modeler! No details are left untouched, everything from modeling the base body right down to the headlights and Chevy logo are covered in full. If you have always wanted to take your modeling to the next level but were unsure where to start then this is the tutorial for you. While not entirely intended for beginners, this tutorial will take someone from a basic knowledge of LightWave Modeler or any other modeling package and through the process of each step, teach you the tools needed to create awesome cars, trucks, planes, you name it. A full collection of reference images necessary to build with are included.
Price: $39.95