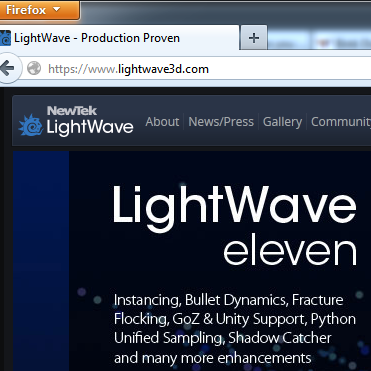 Usually, there isn’t a lot of news surrounding LightWave. Sure, there’s the occasional plugin release or update, but in the run up to the 2012 Siggraph conference (August 5-9), Newtek has made several announcements about its flagship 3D product, and a couple of them are quite significant. A New Corporate Structure Yesterday, NewTek Announced the creation of the LightWave 3D Group. LightWave is now it’s own division and is headquartered in Burbank, California. Rob Powers has been upgraded to division president, and probably has a much shorter commute. A New Website LightWave3d.com, the website that got people all excited last week when an unfinished version was found online, has officially launched. Not only is it a nice looking site, but they also have added a lot of content including a a nice article on Stasys. The registration/support site for LightWave has been moved from Newtek.com to LightWave3D.com, so you’ll be going there from here on out to register and download LightWave 3D. The thing that really has everyone buzzing is the feature list of the upcoming LightWave 11.5 release. For a while there, we didn’t know if there would be a .5 release in the LW11 cycle, and now we know there will be and that it looks like a significant upgrade. A New Service Pack Speaking of upgrades, LightWave 11.0.3 – Service Pack 3 is available for download now. I haven’t seen any official announcements on this, but if you log in on the new site using the username and password you set up at newtek.com, you’ll be greeted with a ‘My Account’ page with download links to the new installers. I’ve not tried it out yet, but it looks like you might be able to run LightWave without the dongle now… providing you don’t use any plugins that are tied to the dongle. It looks like NT is making a real effort to get bug fixes out to users more quickly. I’m sure we all applaud that effort. Two New Videos There are also a couple of new videos on their YouTube channel that introduce the Layout and Modeler UIs. I’m looking forward to seeing the new features of LW11.5 demoed at Siggraph next week. Oh, and for those of you upgrading to SP3, here’s a free tutorial on how to save your custom menu and keyboard shortcut settings so you don’t have to set them all up over again after you’ve cleared your configs
burbank, LightWave, LightWave3D, lw11, new website, Rob Powers, stasys Freebies, Industry News No Comments » Print this News