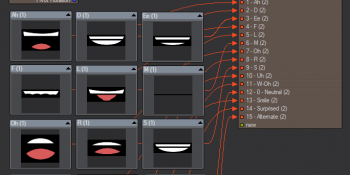 This is a set of nodes that can be loaded into your project for the mouth-swapping type of animation seen in Nightmare Before Christmas and Robot Chicken). Borne out of experiments using Adobe Character Animator, the mouth shapes and order are set up to match the “visemes” in Character Animator. I did add an “Alternate” slot as well for something like frowns or other shapes. You do not need Character Animator to use this. You just need to provide a value between 0 and 14 to select the corresponding mouthRead More 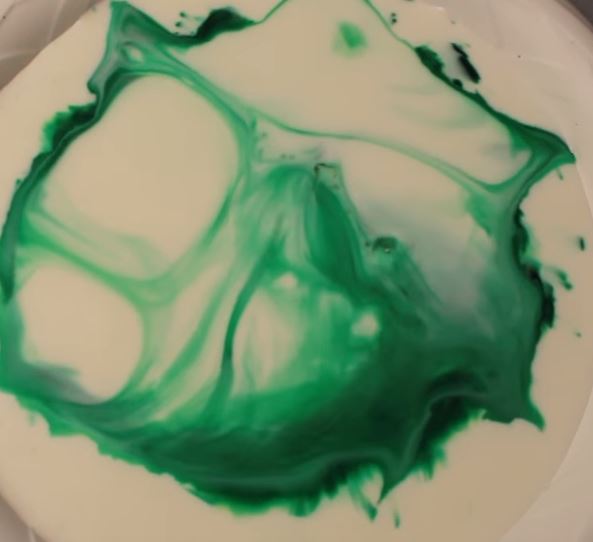 It’s no secret that we here at Liberty 3D like nebulae. Heck, we’ve produced products that show how to make them in LightWave 3D.  Of course, there are other ways of making a nebula besides using 3D software. Here’s a fun video (from the maker of the Doctor Puppet series on YouTube) showing how a rapidly expanding nebula can be made with stuff you could find in a kitchen plus a little compositing software love.   Nebula Related Products: 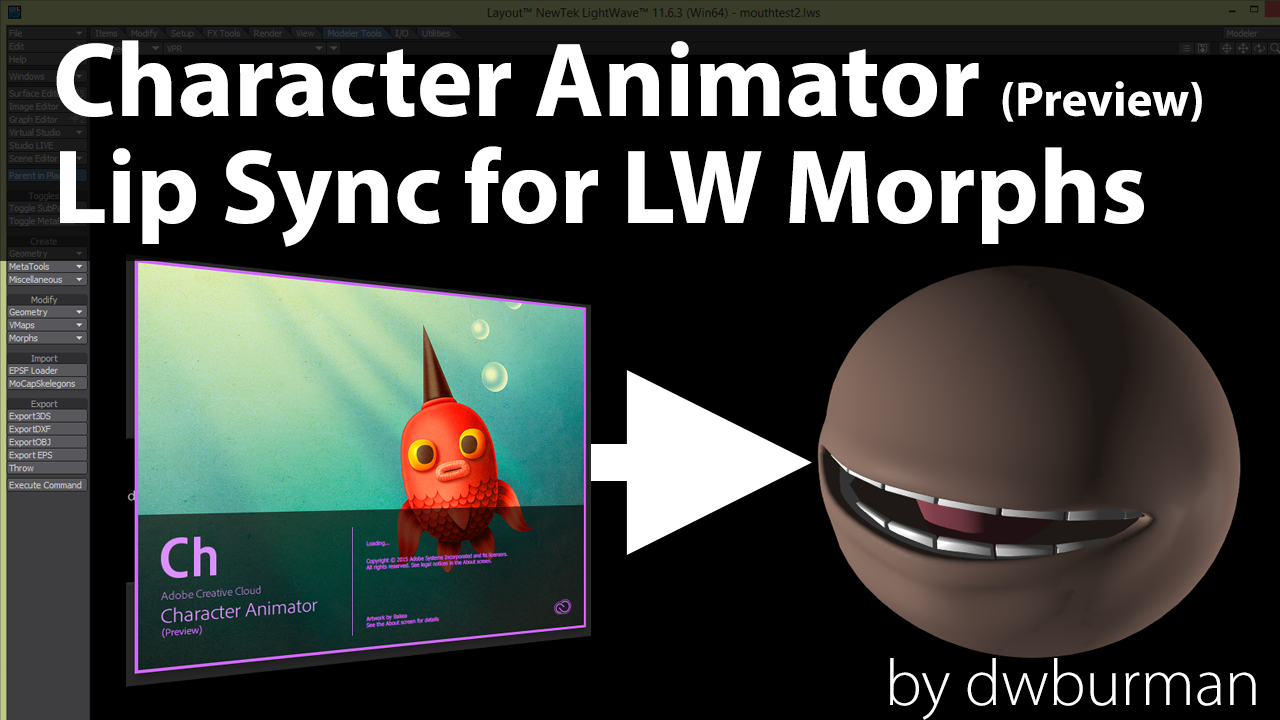 Here it is. Part Two of dwburman’s free tutorials showing how to use Adobe’s Character Animator (Preview) to animate mouths for LightWave and other apps. This time it’s definitely a LightWave tutorial, although the principles should work in other apps that can sample a color value from an image sequence and apply it to something else.   Here’s a little promo for the tutorial showing the results of the technique.   The tutorial itself is 18 minutes long and quickly covers steps in Photoshop, Character Animator and LightWave. The conceptRead More 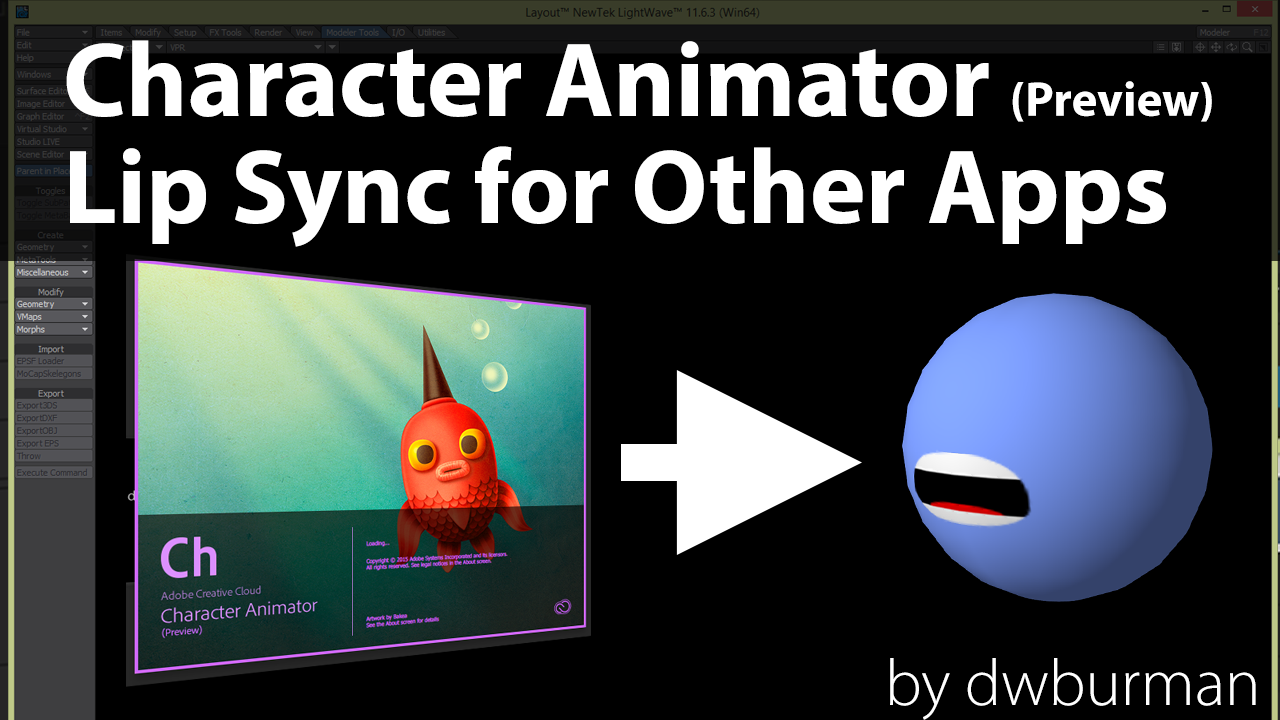 Adobe Creative Cloud subscribers got a new app with After Effects when CC2015 was released. It’s a small, still-in-development app called Character Animator (preview). It’s designed to use a webcam to track video and audio and a few other optional inputs to do simple, automated character animation. DWBurman has been experimenting with focusing on using it primarily to do automated lip syncing. By reducing the artwork to just the mouth, and turning off the head tracking, you can export a png sequence that you can use as a texture onRead More 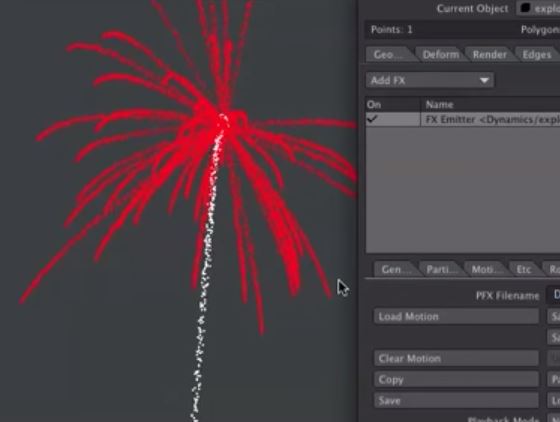 Well, it’s nearly the Fourth of July, and here in the United States, that means fireworks displays. It’s been a long time since dwburman has put out a tutorial, but here are a couple of old and free tutorials that he made that fit with the season. Fireworks part 1 – Particle Emitter Setup And, while he didn’t label it as part 2, it pretty much covers what part 2 would have covered: the sparkling bits. Making Particles Sparkle in LightWave 3D YouTube hosts some really good examples of fireworks made by otherRead More 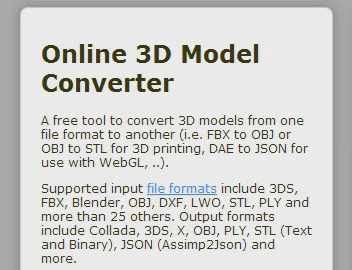 We stumbled across an online 3D model conversion tool we thought might interest some of you. There are more input formats than output formats, so this could come in handy if you have an object in an odd format (full list is below) that you need to get into LightWave. It also exports a couple of formats that LightWave doesn’t have an exporter for. The site is based on Open Asset Import Library, an Open Source library that reads arounds 30 different 3D asset formats and exports to around 8 formats.     Online 3DRead More

Here’s a node set up for quickly and easily moving the camera from position to position by simply animating a null.

Dwburman’s latest tutorial is a riff on his previous mechanical displays tutorials (and probably the last in the set), only this time it’s all about the surface settings. He still wants to a nice promo video mentioning things like “over 2.5 hours of video training!” and “object and scene files included!” while showing the final renders and time lapsed excerpts from the lessons with text explaining what is taught in that lesson. He hopes to get around to doing that soon, but in the meantime we hope the intro lessonRead More 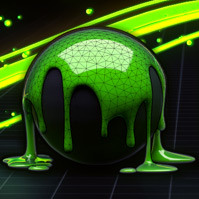 Pilgway studio is announced 3D-Coat version 4.1 has been officially released and is available for download. The update introduces multiple innovations and great improvements to the application. 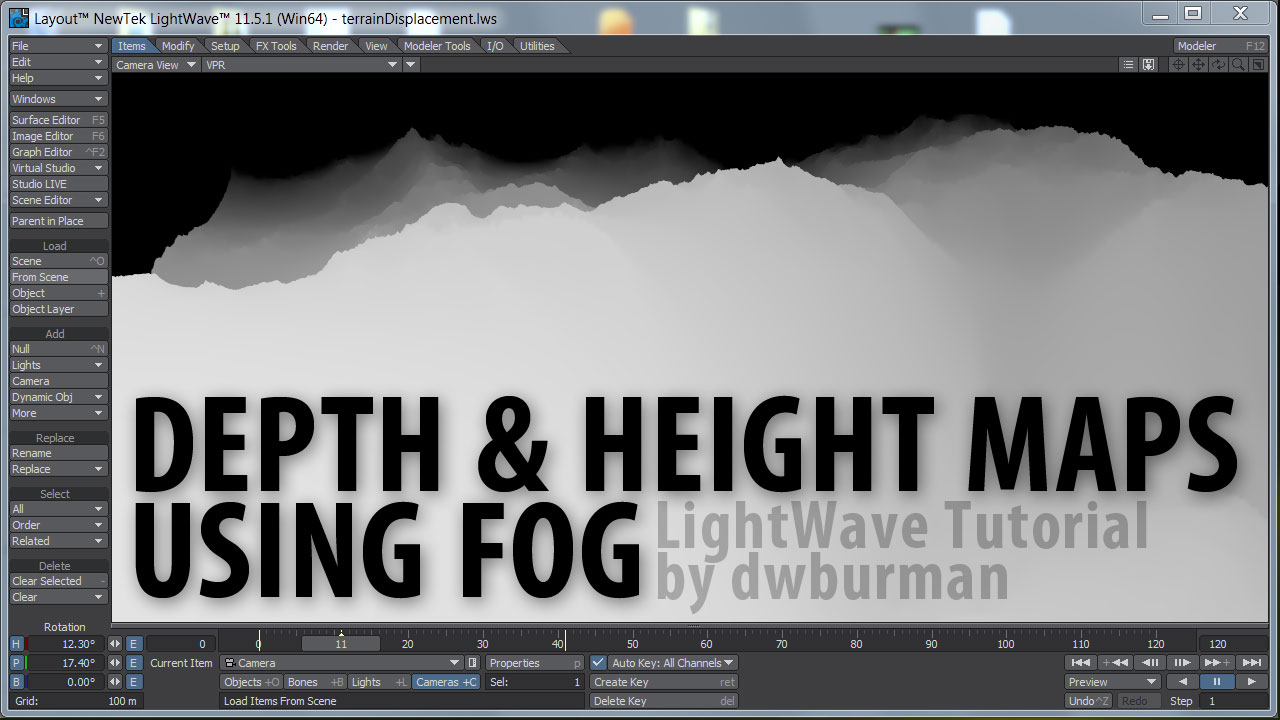 In this video I show a relatively easy way to generate depth maps and height maps in LightWave using the built-in fog tools. Consider this an alternative to using the Compositing Buffer export (or Render Buffer Export in earlier versions of LightWave) if that tool is giving you problems. I also show a few of the fog settings, display settings and setting up an Orthographic Camera. http://youtu.be/0ywUGFiVjr4 –dwburman 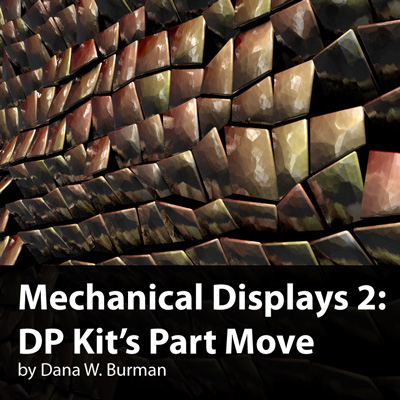 Dana W. Burman shows how a simple node set up with DP Kit’s Part Move (Denis Pontonnier’s awesome plugin) can be used to make some rather cool and impressive moving pictures by using image sequences to drive the animation of parts. [button link=”https://www.liberty3d.com/citizens/d-w-burman/danas-videos/mechanical-displays-2-dp-kits-part-move/”]More Info on Mechanical Displays 2[/button]

The new edge controls added in LightWave 11.5 were a great addition, but there isn’t really a great way to make a line that doesn’t perfectly follow polygon edges. Imperfect edges would be nice to have for some NPR (non-photoreal rendering), or cartoon renders. I did a bit of experimenting to see what I could do within LightWave, primarily to show what I meant by the ability offset edges. I got a little bit carried away and went to a blobby, glowy place with it. 🙂 Here’s the original render:Read More 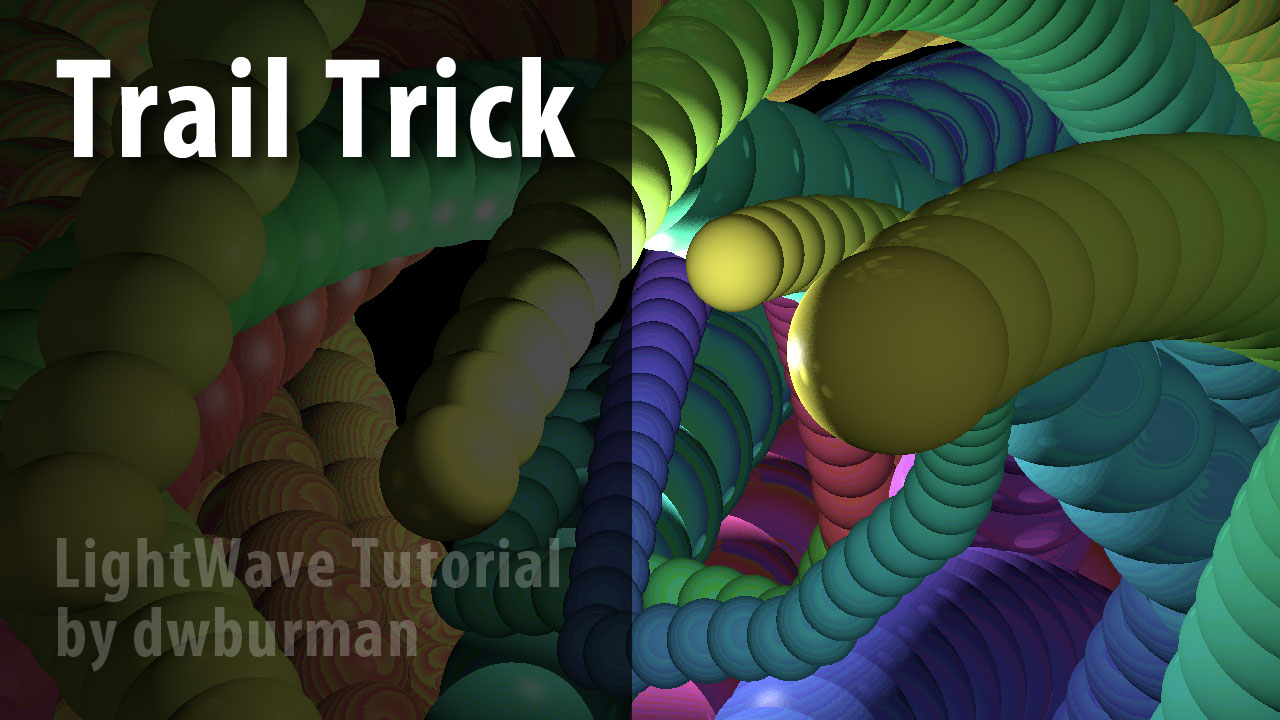 Here’s another way to do some kind of trails in LightWave. This is probably best left to a post production tool, but you might be able to get some unique custom looks especially if you start experimenting with adding a textured filter on the images. There are a couple of other free videos on my YouTube channel that I didn’t post about here. – dwburman 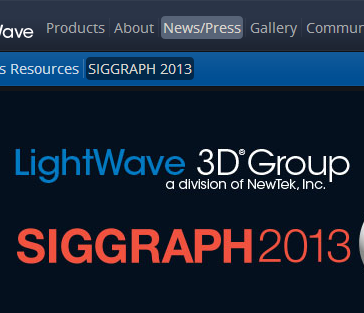 The LightWave development team has been busy over the last few months. ChronoSculpt ChronoSculpt is an amazing looking new product from the LightWave Group that gives cg artists the ability to edit cached animation files and to sculpt over time. It does not appear to create new geometry, but it can throw a massive amount of polygons around with blazing speed. Using ChronoSculpt’s streamlined, uncluttered environment artist’s can retime clips, move pieces around, fix pieces in place and globally change the shape of the cached geometry so it looks likeRead More 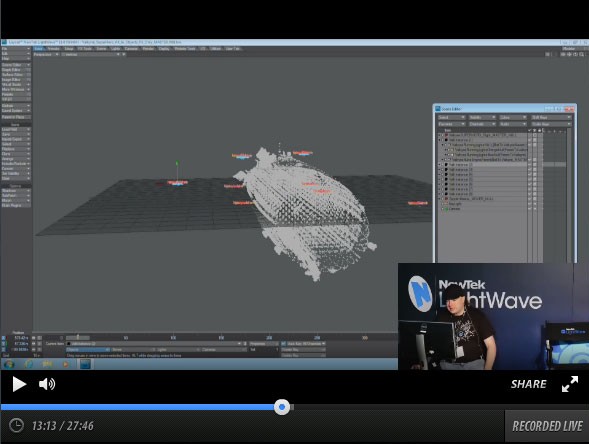 Our own Kelly “Kat” Myers gave a presentation at the NewTek booth showing how they used LightWave 11’s (then) new instancing tools to build shots for Iron Sky. http://youtu.be/BYeFsqaGSw0 Thank you for your patience in waiting for this video to be republished by the LightWave Group

Free Video: Controlling One Item With Another in LightWave 3D 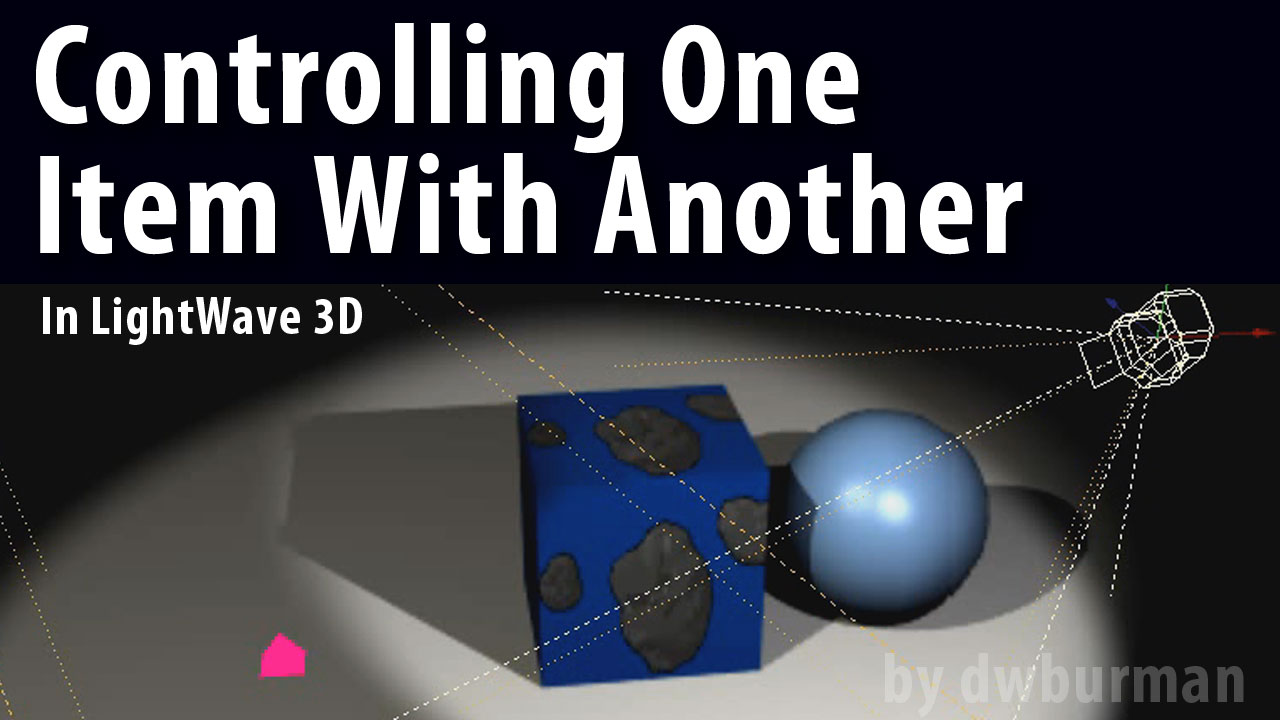 I had trouble trying to decide what to call this video. Basically, it shows a few ways to link a light’s intensity, a texture layer’s opacity and an object’s dissolve setting to the Y position of a null. This will be review for most veteran LightWave users, but these are important tools to learn for the newbies. I was sure I made a video covering this stuff before, but I didn’t see it when I went looking for it, so I made a new one. http://youtu.be/ADdQ0H3xf20 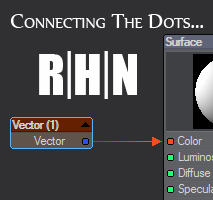 Rebel Hill decided to distribute the first part of his RHN tutorial for free. Now everyone can get in on the nodal learning goodness by checking out his YouTube channel. You can now watch the Nodal Fundamentals Videos on YouTube. These videos will still be available as quicktime movies when you buy the full RHN Full Package which includes RHN – Nodes & RHN – Projects, and is also included in quicktime version with individual purchases of either of these two chapters.

If you’ve been frustrated by the way Photoshop loads Alpha channels in .EXR files, there is a solution if you’re using CS5 or higher on the PC or a Mac with an Intel Processor. 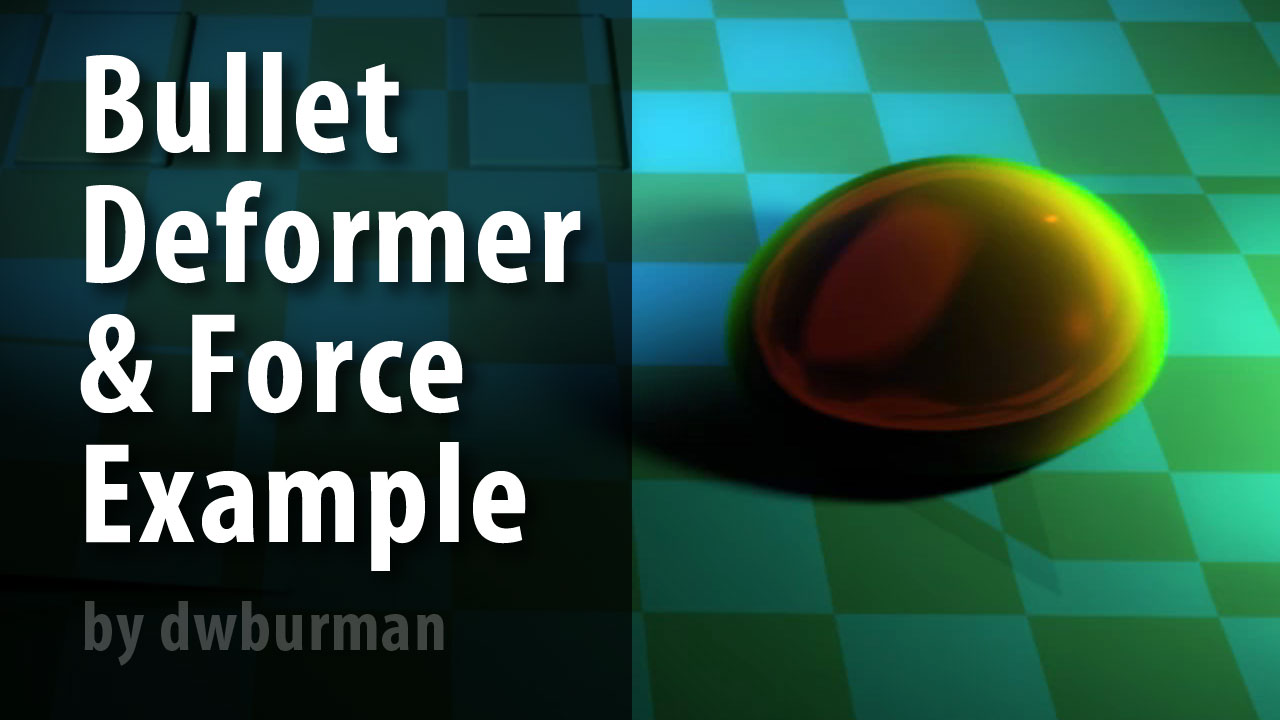 This is just a follow up to an earlier video I posted on my YouTube Channel that shows the Bullet Dynamics settings I used for the shot. I also discuss some of the things I’ve recently learned about LightWave’s Bullet Dynamics system. Watch on YouTube The full animation: 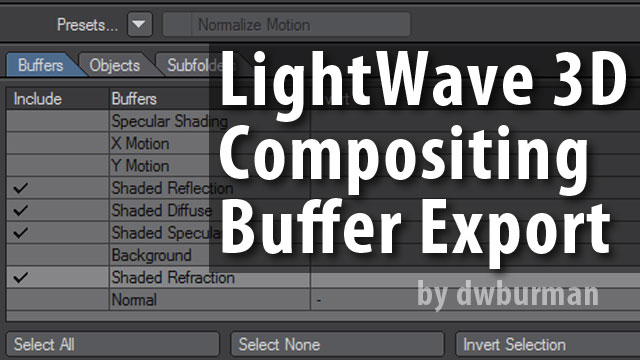 This video covers some of the functionality, workflow and quirks of LightWave 11.5’s Compositing Buffer Export. It’s not a comprehensive video about the tool, or the concept of multi-pass rendering, but it does show the basics of how to use the tool and warns about a fairly big gotcha with it.