Free Video : How to use Virtual Studio tools in LW11.6 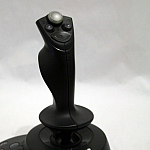 If you are unfamiliar with LightWave’s Virtual Studio Tools – the ability to capture live performance (think Mocap, Virtual cinematography, physically “driving” a vehicle and storing the animation for rendering, etc) – or you’ve just plain avoided that “complicated” looking system altogether, then here is a nice simple introduction to just how easy it is to set up and use. In this example, a USB Joystick is used – but the virtual studio allows any HID (Human Interface Device) that the system will recognize to be read and used. (Obviously there may be some that won’t, but so far many do (even my USB headset, though rather limited as you’d expect)). Do check it out – its not only cool, its surprisingly a LOT of fun as well. In part 2, I look at using the Control Booth in Virtual Studio Tools to set up my device to work as a part of the LW interface – Even if you never plan on using VST to animate in real time, this Control Booth offers a new way to work with Layout’s UI…
animation, free, Freebies, LightWave3D, lw11, tutorial, virtual studio, VST Freebies, Fun, Liberty Training No Comments » Print this News