Hello there in Internet-Landia! Wow, what a whirlwind week. Now that we are back from Siggraph, Liberty3D is already working on new tutorials, new product development and more.  For the moment I would like to report on some of the stuff we saw and the conversations we had with many people at the LightWave3D Group booth. First off we had a fantastic time at the show and we would like to thank the LightWave3D Group and the presenters for making it a lot of fun. Of course everyone was very excited to see the new product offerings from NewTek/LightWave3D Group including Nevron Motion and Chronsculpt. These two products came out of the blue for the most part but once revealed, immediately hit the mark as being a logical, smart move for the LightWave3D Group to execute on. Attendees at the show were very impressed and lots of people at the booth wanted demonstrations of work flow and immediately understood how these tools would benefit their pipelines. LightWave3D 11.6 was also revealed with great anticipation of new features. The Raycast Node Technology developed by James Willmott (the guy behind flocking and our very own Quad Panels plugin here on L3D)  demonstrated by Deuce and Jen (Celshader) showed only a small snip-it of this incredible functionality and flexibility of the LightWave product and what can be done with this new technology.

Another LightWave3D 11.6 feature that didn’t get much attention because it’s hard to demonstrate for a crowd or for viewers online without the proper hardware  is the new Stereoscopic display technology. This feature is found in the VPR settings panel as a plug-in for VPR (a new technology right there- plugins for VPR?!) named 3D Vision Pro. Now while I was told to push the fact that this worked with nVidia’s 3D Vision Pro Stereoscopic shutter glasses and an approved Stereoscopic display approved by nVidia – in reality it was developed using OpenGL Standards, meaning Quadbuffered Stereo and its roots or lessons come from UberCam 2.0 (Internal Release) which has a stereoscopic F9 Render window capability. In short this means you can use a passive stereoscopic set up like what I have here at home on my personal workstation, connected to a LG 3DTV fed by my AMD Radeon 6800 graphics card. So with this new function in LightWave you get the best flexibility possible when deciding to choose your solution for viewing stereoscopic material. Be it nVidia’s 3D Vision Pro Shutter Glasses or an AMD based passive stereo monitor/screen solution you are able to use it out of the box. After being on two stereoscopic shows back to back over the last 18 months using LightWave, this is incredibly important to people like me who are constantly working with stereoscopic material. I’m about to start the Stasys production cycle (yes, we are now in the previs stage for Episode 101) and with VPR support of Stereoscopic it makes my life so much more enjoyable. I should add that the goal of The LightWave Group is to enable stereoscopic viewing using this technology in Wireframe/Texture Shaded modes as well, potentially carrying this across the entire product offering (perspective views and maybe even modeler, but that’s pushing it a bit I think – but its not impossible). Remember I don’t work for NewTek so anything I say here about future product direction and development is speculative.

Now let’s talk a bit about Nevron Motion. First of all it’s awesome! I can tell you that from having used it,  even demoing it for people at the show without any real introduction to it before hand. It just makes a huge amount of sense once you look at it if you have an understanding of Virtual Studio Tools in the least. As you may know you can buy it now and get it now. As in right now today, just like LW 11.6 and Chronosculpt which are in pre-release build levels at the moment. Secondly it opens up a huge amount of potential for productions to quickly do previs using the Kinect for character animation but its not just a Kinect Motion Capture plug-in for LightWave. It’s a full solution for dealing with motion-capture in LightWave, from any file source you can practically think of. BVH, FBX, even other animation from LightWave scenes if you really want to get funky about it. For 300 bucks its totally worth it if you deal with motion capture at all and even more worth it when you consider you get Facial and Body Tracking via the MS Kinect as well. Similar products in this price range are all stand alone or costly – for example FaceShift… Those guys want 1500 bucks! And it only does Facial Motion Capture… Yeah whatever! I want it in LightWave directly and I don’t want to pay that much for facial motion capture from the kinect… like come on… Funny thing is that FaceShift had a booth at Siggraph and I told them all of this last year concerning my issues with their product offering. Needless to say, Nevron Motion stole the show and the thunder away from FaceShift completely at Siggraph. Really… for the cost of Nevron Motion, the Kinect and LightWave3D you are in the same price range as FaceShift (which is subscription btw!) so why would you even consider FaceShift when you get all that from Nevron Motion and LightWave3D together? I don’t know… but the math adds up way more in LightWave’s favor. Even if your normally don’t use LightWave. Part of the reason why the LightWave Group released this product.

Next up is ChronoSculpt. Wow… Just wow. I really wish we had this tool available to us on Iron Sky for use in the sequence where we blew up the Zeppelins and other ships. No really… it would have made working with those brutally over done sims from the Maya twit who took 4 months to do that one zeppelin explosion in nCloth. With Chronosculpt we could have used the same sim over and over again but in a different way each time by simply re-timing certain portions of the geocache itself. Man… I can’t wait to get into the tutorial for that! But I digress.  The LightWave3D Group’s motivations for producing this product are pretty clear. It’s an agnostic product that can work with just about any Geocache format on the market, one of which is their own standard, accepted industry wide (MDD – Fuck you autodesk!)  and that means they can sell it into studios in large numbers. This is critical. The LightWave3D Group needs to make money and it can do that over and above with ChronoSculpt rounding out the product offerings while also pushing back into larger studios through a back door. My hope is that when studios see the power of Chronosculpt and its price they will be a little less attached to Autoplex pipelines. This means more future sales potential for a market that LightWave has been for many years locked out of by Autodesk (forcefully I might add, I encountered this myself just before going to the show). Chronosculpt has immediate benefit to anyone from an individual artist to mid-sized or mega-studio because it makes quick work of dealing with a big problem. Clear and simple, entirely elegant and very smart for The LightWave3D Group. I now that this product will sell well as is and its future development looks very bright. I should also point out one thing concerning Autodesk… They were not present at Siggraph. Very interesting. Also missing from Siggraph were a lot of the schools pushing high-priced “education” in the VFX/Animation industry. Still a few schools and representatives showed up including one clown out of Vancouver who I will not mention by name – schlocking his schools wares. All I can say…. Whatever buddy. You betrayed LightWave years ago and screwed people like me over to keep your cushy job and it got cut as the studio you were attached to fell down hard because of its allegiance to Autodesk’s costly pipelines. Good luck in the future teaching the next generation of drones for an industry you helped kill. Ok that’s about it for now as I have to get back to working on tutorials, Stasys and more!   Kat
2013, 3D, Anaheim, ChronoSculpt, LightWave, Motion, Nevron, NewTek, plugin, Siggraph, stereo, stereoscopic Articles, Industry News, Official, Tools One Comment » Print this News 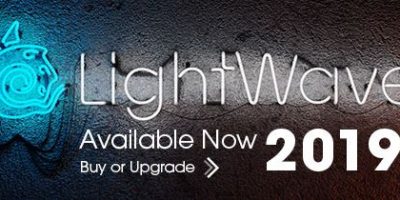