LightWave is not dead.

kat | August 1, 2017
LightWave3D first appeared in 1990 on the Video Toaster 1.0 for the Amiga. That means it’s 27 years old as “LightWave3D” but its origins go back a few years prior. Yes, it’s old. Being old doesn’t mean obsolete. Old doesn’t mean useless. Old doesn’t mean dead. It does mean several things. Mature, battle hardened, but more so than anything; legendary.

It’s a survivor of over 2.5 decades of massive changes in the industry, having spent much of the first 10 years of that time leading the way in TV visual effects with the ground breaking work done by Ron Thornton and his team (who would become the iconic Foundation Imaging) on Babylon 5 and then later on several TV series including the Star Trek franchise  (mostly Voyager) and many, many films. That’s just Ron’s work! There are many artists and supervisors such as myself who have had similar success over the course of their careers with LightWave3D, several of which I have worked with personally and we all have a lot invested in LightWave that goes beyond money. Many of us have come and gone over the years. Some to leave, others to return, and a few, very close to home here at Liberty3d.com having passed on. Ron being one of them as sadly, he is no longer with us, having passed away last year, along with my VFX supervisor on Battlestar Galactica, Gary Hutzel. Yet, the product continues on and artists around the world continue the legacy and the legend. A living legend that makes the impossible come to life, in our hands. Remember that part! That is LightWave. It’s not just software to us. It is indeed our lives. The foundations of our careers in VFX, Animation, Games, you name it. It is in our blood. 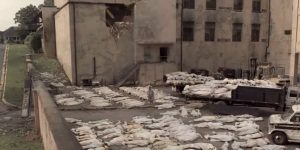 I’ve personally used it to produce some of the most iconic LightWave (let alone TV) visual effects seen in the last 12 of those years as part of small teams working against the clock with the “we air in 2 days” gun to our heads and we’ve always come through. LightWave has always come through. This, despite the best efforts of some really inept people or those with nefarious intentions, it has survived and will continue to do so. I will tell you this right now. LightWave3D is not dead. So stop with the speculation.  To prove a point, we are having a sale right now for Siggraph week. While there is no “booth” presence at Siggraph for LightWave this year in LA (not a big deal really, Siggraph is not what it used to be), I can tell you that many LW artists, 3rd Party Developers and LWG developers are there, some of whom have flown in from around the world to attend. Now does that sound dead to you? No. It’s not dead. So stop saying it is. Just because the man fucked up (royally) doesn’t mean anything but that he’s a moron (like I told you years ago but many in the community just shat on me for saying). While I cannot attend due to my production schedule, I really wish I could. But hey, that’s how the ball bounces. No matter, we have things to do and that means we keep rocking it, as we always have at Liberty3d.com, to bring you the goodies.  We have so much stuff coming out and planned for the next 6 months that you would be hard pressed to believe for a moment that we would be doing any of this if we felt LightWave was “dead”. That’s because it’s not. So, with that said… Get 25% off your purchases here at Liberty3d.com until Saturday, August 6th, by using the coupon code: LightWaveIsNotDead Trust me on this one. Do you think I would let LightWave die? Do you think others like me would? As Larry used to tell me, “Not a chance in hell.” So don’t bet on it. How do you think Liberty3d.com came into existence in the first place? Perhaps the theme in BSG applies here because I’ve seen it all before a few times now myself with LightWave over the last 27 years. “This has all happened before and will happen again.” LightWave is not dead. Kat
FeatureSlider, Official, Store, Liberty Training 19 Comments » Print this News

19 Comments to LightWave is not dead.