Chilton Webb | December 20, 2018
Four years ago I published a set of tutorials for Unity pipelines, and a lot has changed since then. In this bundle, you will get the earlier 4 Animation Pipeline pack, slightly edited for accuracy, plus additional notes for Unity 2018, GlyconVR, Substance Painter (including a Substance Painter config that simplifies Unity work), a model Santa Claus with no license restrictions, and a video on character animation. Over 700Mb of content and 20 minutes of additional, concise, edited video and instructions. Animation Pipelines for Unity will walk you through the 5 methods of animation in Unity, using terminology and concepts familiar to LightWave3D users. It covers the BlendShapes in Unity (starting with Unity 4.3) using Endomorphs in LightWave 2018, as well as traditional bone rigged animations, Unity Animations, entirely scripted animations, and Humanoid Mechanim animations.   It shows you how to build a working, responsive gun turret using each of the animations, which will spin and fire. Watch a preview of it here! 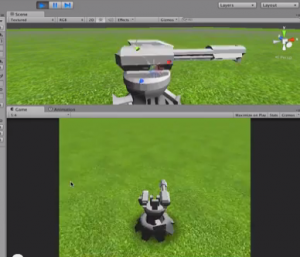 You’ll learn how to animate this cannon, so that it spins and fires, with recoil, using four different techniques. From there, it’s up to you to decide which you prefer for your own animations.

It also includes a more advanced version of the scripts you’ll see in the tutorials, including free models, scripts, and a working head start for a game that uses those scripts. So if you want to learn how to build animations in Unity3D using LightWave3D fast, this will show you how, give you examples, tips, and even a working start for your own game. (You could easily incorporate this along with the Velocitractor from the other tutorial, and you’d be about 90% done with an entire game!) 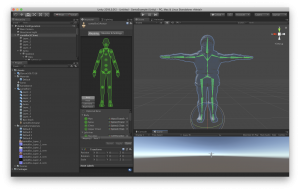 And now in 2018, it features a dancing Santa Claus, showing how to go from a t-pose to the proper naming convention for all of the pieces, and how to easily create animations that will work in Mechanim. This shows exactly what you’ll need to use, if you want to create characters and animations that can be instantly reused and swapped inside Unity based games and animations. Also included is a bonus addendum with tips and secrets to getting around a few known bugs (which will save you a ton of head scratching), what drawbacks exist for each type of animation, and generally how to make your animation life easier. You can get a free demo of Unity Pro 4 here… Unity3D.com You can get a free demo of LightWave 11 here… LightWave3D.com   Contents include four videos that show various techniques to arrive at the same animation. Specifically, a gun barrel will spin around on its base, and fire. When it fires, the barrel will recoil, then slide back into position. Unity Animation (15 minutes) – Use Unity’s built-in keyframe animation to assemble layered models right in Unity. Scripted Animation (15 minutes) – Use C# to drive the same animation from scripts, accessing and interacting with hierarchically stacked layers. Bone Rigged Animation (15 minutes) – Use Skelegons and Bones to create a rigged version of the animation, along with weight maps to allow a single layer object to behave as multiple layers. This is all driven by a simple script. This technique requires only 1 draw call in Unity, and is perfect for mobile games. It requires a bit more setup than the other methods, but works spectacularly. Blendshape Animation (15 minutes) – Use Endomorphs in LightWave to generate a morph mapped file that can be easily manipulated by hand, or by script, on a single layer. This technique requires only 1 draw call in Unity, can be created straight from Modeler, and is perfect for mobile games. Hard Body Animations Unity project. This includes the models seen in the videos, as well as a more advanced, working version of the models and scripts that show slightly more advanced concepts. Addendum (bonus notes) covers when to use which animations, drawbacks to each type, and known bugs you should know about, so you can work around them. LightWave 2018 to Unity 2018 (6 minutes) covering a few things that can make your life easier now. Substance Painter 2018 to Unity 2018 (6 minutes) covering the easiest way to get quality textures into Unity instantly, and with minimal additional work. Includes custom config file that sets up your exports properly for Unity. Character Animation Export (7 minutes) covering gotchas and general pipeline secrets to leverage Unity’s Humanoid Mechanim Character system. All of this, for $29.95! Order now, and in less than an hour you’ll know exactly how to animate hard body models quickly and easily! [wp_eStore:product_id:424:end]
Featured, FeatureSlider, Official, Store, Tools, Liberty Training No Comments » Print this News