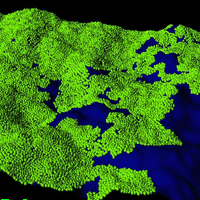 Denis Pontonnier is well known around these parts for greatly expanding the possibilities of Lightwave. Some of his plug-ins allow you to do things in Lightwave that would otherwise be impossible, or at the very least, very difficult. Perhaps the most amazing thing is that he makes these tools available as freeware, although he does accept donations via PayPal. This week I’m highlighting his DP Instance plugin. Why? Well, because it is pretty cool, and because I already have a video made showing how to get started using it. DP Instance is a volumetric plugin for scattering instances of objects throughout your scene. The effect is like cloning your objects except that instances do not require as much RAM as your clones would, plus you won’t have hundreds or thousands of separate objects clogging up the scene editor or object lists in Layout. It looks like the documentation on the website has been updated, so if you’ve had this plug-in a while, it might be worth going back to dpont’s site to check out the docs and download the latest version. One downside to using instances, is that the instances do not show up in render buffers. If you want to do a separate reflection or diffuse shading pass or something, you’ll have to do it manually by making special versions of your objects and scene for each pass. Compatibility: DP Instance is available for: Win32 Win64 (courtesy of Marvin Landis) Mac UB 32 & 64-bit (courtesy of Mike Wolf) I should point out that HD Instance from Happy-Digital is also a volumetric instancing plugin. It has some different features, better documentation, may be a little easier to use and is renders significantly faster than DP Instance. I do not have the latest version of HD_Instance, so I cannot compare them accurately. dwburman
dpont, instance, lwpoftw, plugin Industry News 6 Comments » Print this News

6 Comments to Lightwave Plugin of the Week: DP Instance